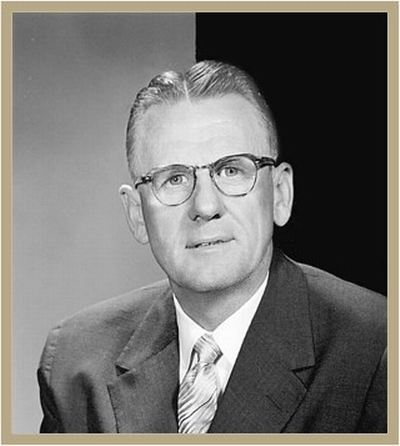 At the age of 23, George Foerstner built his first beverage cooler at the request of an Iowa City restaurant owner. This was the first of many firsts in 1934 for George, who founded a company that would later be known as Amana Refrigeration, Inc. Foerstner’s vision, coupled with a keen entrepreneurial spirit, is credited for bringing comfort and convenience to countless lives worldwide.

George lead Amana with achievements that include being the first to manufacturer a side-by-side refrigerator freezer, introduce 115-volt counter-top microwaves, room air conditioners, central air systems, and kitchen ranges. He was among the first to urge businessmen to look around the world to expand exports of product manufactured in Iowa.

A leader and innovator in the appliance industry, George’s real interest in business was people. He co-founded the Amana VIP Golf Tournament, which provides financial support and recognition for the U of I athletic program, the “I” Club Scholarship Fund, and was instrumental in establishing the Hoover Library in West Branch.