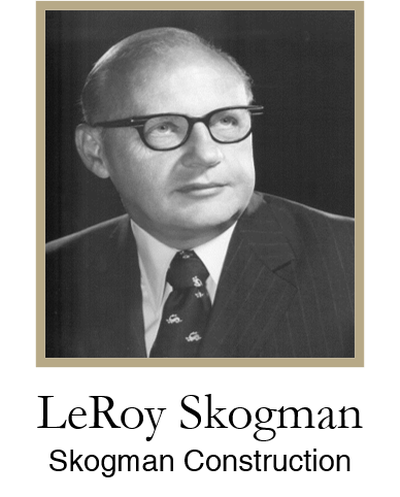 At the age of 21, LeRoy Skogman moved his family from Omaha to Cedar Rapids to help out with his father’s construction business. Over the next 55 years, LeRoy’s ideas and innovations became a reality in over 10,000 housing units built by the Skogman Companies.

A leader and innovator in the housing industry, he believed in building neighborhoods, not just houses. One of the best known Skogman developments, Bowman Woods, began with just a few houses on a gravel road. Today, there are 1,200 homes, a grade school, a park, churches, a pool, tennis courts, a walking trail and retail shops.

A hard-working, loyal businessman, his love of family always shone through; with the celebration of his children & grandchildren’s successes as though they were his own.