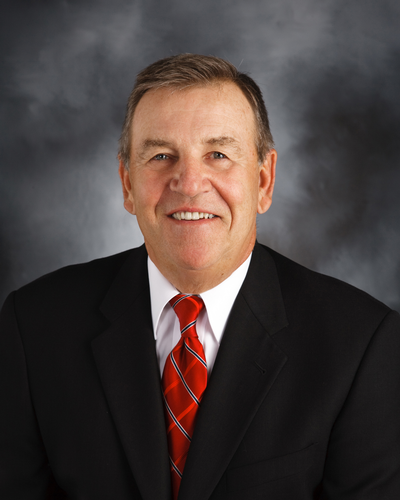 Born and raised on his family farm near Newell, Iowa, Rex attended the University of Northern Iowa and then served in the United States Army during the Vietnam War. Upon his return to the United States, Rex joined Life Investors Insurance Company of America in 1969 as a sales representative. Over the next fifteen years, he held a variety of sales and administrative positions before being appointed President and CEO in 1984. Under Rex’s leadership and entrepreneurialism within the business, he has grown Life Investors, now Aegon USA, from 50 local employees when he first started to nearly 4,000 employees locally.

Rex is admired for his loyalty to his employees and demonstrated this in 1991 when he started a “Masters Group” at Aegon, which recognized individuals who had started with the company in the early years and contributed to its growth. He believes in giving people the opportunity to grow professionally. Even when it wasn’t popular, Rex continued in Agency building so his sales force could continue earning based on their performance, putting no limits on their individual growth potential.

Rex has a demonstrated passion for community service and has served on numerous boards and committees, including serving as the United Way Campaign chair in 2005, raising $9 million. Rex has also served on the Aegon Transamerica Foundation contribution committee since its inception in 1994, giving approximately $11 million to local non-profits in the past 10 years. After the historic floods of 2008, Rex began as the Chair of the Human Service Campus Facility Committee, raising $12.5 million to date of the $14 million goal. The facility will allow nonprofit agencies that were affected by the flood to be under one roof, thus reducing their administrative costs by encouraging shared resources.

With a dedication to furthering education and his love of his alma mater, the University of Northern Iowa, Rex co-chaired the “Students First Campaign” which raised over $100 million for the school. He and his wife, Kathy, have established a full tuition scholarship for University of Northern Iowa students and Rex received an honorary Doctor of Human Letters, only the 17th that has been awarded in the school’s history.