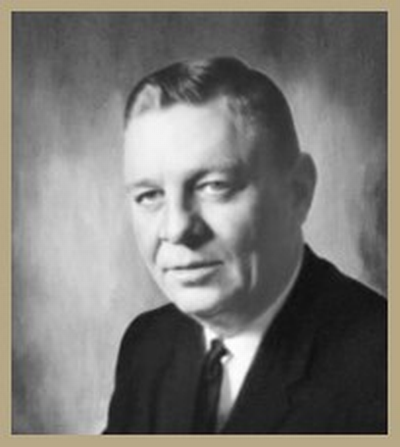 For nearly seven decades, Louis Walker’s vision has kept people walking in style and comfort. As the founder of Walkers Shoe Store, his philosophy was always to make sure his customers walk out of the store with shoes that fit. This simple philosophy has not only made Walker Shoes a well-known name in the Cedar Valley, but has created a loyal following of customers.

Louis grew up on a farm in Finchford and then moved to Waterloo when he was 14. He got his first taste of the shoe business when he was 14, selling shoes at Arends Shoe Store in Waterloo. At 21, he became a partner in Fox’s Shoe Store, and at 28, he opened his own store with loans from Florsheim. In its first year, the shoe store grossed more than $72,000, which was quite remarkable for the middle 1930s. But for Louis, it was just the beginning—his goal was to have a Walker’s Shoe Store in every major city in Iowa.

Born in Finchford in 1908, he graduated from East Waterloo High School in 1925. Upon graduating, he attended one year at Iowa State Teachers College, now the University of Northern Iowa, and worked part-time at Fox’s Shoe Store. For financial reasons, he quit school and concentrated on work. In 1930, he married Genevieve Holman, who joined him in the shoe business. Walkers Shoes was a family affair with Genevieve working Saturdays and holidays, and son James and daughter Jane opening the door for customers or helping wherever they could. Louis passed on his work ethic and knowledge to James, who began selling shoes at 11.

Hard work didn’t frighten Louis Walker. By 1972 he had opened 11 stores, including locations in Des Moines, Mason City, Dubuque, Cedar Rapids, Sioux City and Crossroads Mall in Waterloo. When Walkers Shoes first opened in 1936, it was competing with 13 other shoe stores. During the initial years of “mall sprall,” many of the shoe stores moved out of downtown Waterloo or simply closed shop, unable to compete with the discount or corporate chain shoe stores. Although branch stores in Crossroads and College Square Malls have since closed, Walker Shoes has done more than survive; the Walker chain is strong, with six stores throughout Iowa.

Through his business he became active with the National Shoe Retailers, serving on the board for 21 years. Walkers Shoes has been a member of the Shoes Associates since 1962. He was also an original board member of the University of Iowa Scholarship Fund, past United Appeal chairman—now the United Way—with the distinction of being the first person to reach its fundraising goal. Louis was also the past president of the Waterloo Chamber of Commerce and one of the original board members of the Waterloo Industrial Development Association and the Iowa College Foundation. He was inducted into the East High School Hall of Fame in 1981.

Louis retired as president in 1986, but kept his hand in the business as firm chairman. His son James took over as president and grandson Jim Christensen assumed the position of vice-president. His retirement gave him time for his other interests, which included U of I sports, bridge and golf—in his earlier years he was ranked as one of Waterloo’s top golf amateurs, winning many a golf tournament. He also enjoyed dancing to Big Band music and fishing in Canada. He died in 1996, at the age of 88. Louis’ son, James Walker has since retired and his grandson, Jim Christensen is now the president.