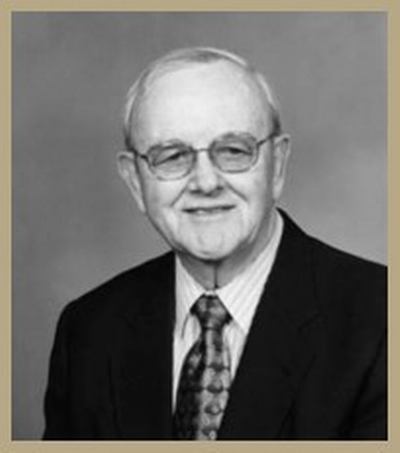 Robert Giertz is the kind of person you’d want on your team—structured, disciplined, dependable, yet always ready for a challenge. He demonstrated his teamwork and leadership qualities while still a student at the University of Illinois, where he and fellow students organized a student branch of the Society of Automotive Engineers. Bob honed these skills while working in many leadership capacities at John Deere Waterloo Tractor Works and then later at Deere & Co.

Bob Giertz comes from a family known for its longevity. Born in Illinois in 1925, Bob is the youngest of four children—all of whom are still living. He and his wife, Vera, have been married for 56 years, and celebrated their 55th wedding anniversary with their family at their summer place on Burnstide Lake near Ely, Minnesota. The Giertz family now totals 33, which includes their children, Deborah, Nancy, Norman, James and Julie, their spouses, grandchildren and great-grandchildren.

Longevity is also the watchword when it comes to Bob’s career with Deere & Co. First serving as a summer intern at the John Deere Waterloo Tractor Works while still a college student, Bob then accepted full-time employment in the product engineering department following graduation. It didn’t take long for the young ambitious man to establish himself as capable, dependable and hard working. He immediately began working on the project for the “New Generation of Power” tractors, introduced in 1960. In 1963 and 1964, Bob worked with Harold Brock, Bob Peterson of Northland Oil and other professionals in the area to establish the Mississippi Valley Section of the Society of Automotive Engineers, and served as its first chairman.

In 1965 he was appointed chief engineer of current products and by February of 1967, he was named assistant manager to Harley Waldon. Later that year, Bob was appointed general manager of the Tractor Works; a position he held until transferred to Deere & Co. in late 1974, as director of manufacturing. In that capacity, he was responsible for the Waterloo facilities, so he still had a lot of contact with people here. He retired from Deere & Co. in 1986.

During his stint as general manager at the Tractor Works, Bob served on numerous commissions, boards and foundations in the Cedar Valley. Among the lengthy list are appointments to the Iowa District Judicial Nomination Commission, board of directors for the National Bank of Waterloo and Midwest Energy Company, board of trustees for Schoitz Memorial Hospital, the University of Illinois Alumni Foundation and board of governors for the Iowa College Foundation.

Junior Achievement in the Cedar Valley owes its existence to the hard work and dedication of Bob Giertz and other Deere associates, Harold Brock, Lyle Cherry and many others in the Cedar Valley. In the early 1970s, they took the necessary steps to establish Junior Achievement of Black Hawk Land. Bob’s peers also selected him to serve as president in its first year of operation.

Serving also on the UNI Foundation Board, Bob was part of the fund-raising effort to building the UNI-Dome and participated in the groundbreaking. Bob also served on the Iowa College Foundation board and it was during this time he became acquainted with many college presidents, learning about their special concerns and challenges.

Admitting that none of his awards are of national stature, but “nonetheless important to me,” those he prizes the most are a Distinguished Alumni Award from the University of Illinois College of Engineering, JA Achievement Award and “In Appreciation From” his friends and associates at the John Deere Tractor Works Team, for “not disrupting them during the start of the new manufacturing facility in 1980.”

Although he hasn’t lived in “Black Hawk Land” for some time, he still has a love for the area and its people—saying that “We are most grateful for the experiences we during the years we lived in Waterloo. Those years were really great years for us, ‘the best years of my life!’